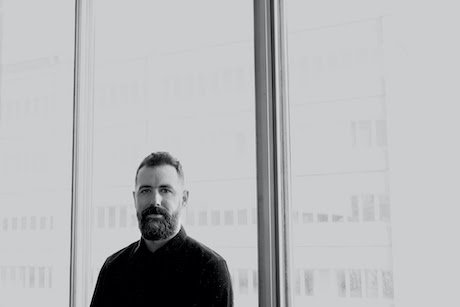 Canadian saxophonist Jason Sharp has been a fixture of Montréal’s experimental/improv scene for many years, chiefly as a saxophonist exploring eletcro-acoustic and durational music, and in a wide variety of jazz, avant and contemporary music ensembles. Back in 2021, He has released a new album called The Turning Centre Of A Still World which is out now via Constellation Records.

According to the press release, it is Sharp’s first purely solo record and his most lucid, poignant, integral work to date. Following two acclaimed albums composed around particular collaborators and guest players, Sharp conceived his third as an interplay strictly bounded by his own body, his acoustic instrument, and his evolving bespoke electronic system.

The Turning Centre Of A Still World is a singular sonic exploration of human-machine calibration, interaction, expression and biofeedback. The immersive, intensive, widescreen electronic works could sit comfortably as a masterful and stellar contribution to the space/sci-fi/synth soundtrack genre, owing to their overall sound palette and oceanic scope. But this is ultimately deeper, grittier, earthier stuff – pulsing with terrestrial granularity, charting subterranean geographies of the heart and soul.

Now, throughout April and May, Jason Sharp will be touring his immense audio-visual experience, with the help of abstract, experimental filmmaker, Guillaume Vallée, who will be providing an interactive version of the art he creates to accompany Sharp’s album – visuals which react and change to reflect Jason’s heart rate while he plays, leading to each performance being utterly unique.

Watch the new video for the track “Velocity of Being“ and check this awesome list with 7 artists and tracks which have inspired his music.

The John Lurie National Orchestra – The Invention Of Animals. I love John Lurie’s saxophone playing and music.  Discovering his entire creative world was profound for me as a young saxophone student. I found something in it that was so authentic and beautiful that it forever impacted my musical course.

Les McCann & Eddie Harris – Compared To What? . This is one of my all-time favorite musical moments captured on record.  The great Eddie Harris was invited to collaborate with the Les McCann trio on this impromptu concert for the Montreux Jazz Festival and lightning was captured on tape.  I never get tired of listening to these solos or the immense groove of this track.

Floating Points, Pharoah Sanders & The London Symphony Orchestra – Promises [Movement 6]. Staggeringly beautiful, delicate, powerful, and joyful. This really is an amazing record. At first, I was struck by the commitment to a singular motif for the entirety of an album, then upon many listens I’ve come to truly appreciate the great potential of working outwardly from a small space.

Sabu Martinez & Sahib Shihab – Winds & Skins. Sahib Shihab is one of my favorite baritone saxophonists. This recording captures a rare period where he was experimenting with electronics and the saxophone with a pitch to CV converter into analog synths.  Despite his tone on this track being completely electronic his playing is immediately identifiable. Paired with the master percussionist Sabu Martinez this recording has such a beautifully unique raw sound and was one of my early introductions to saxophone synthesis.

Sofia Jernberg – One Pitch: Birds for Distortion and Mouth Synthesizers. I’ve come back to this performance many times and remain completely blown away by Sofia’s musicality and command of her instrument.  I hope to hear her in person one day. It’s astounding.

Toshimaru Nakamura – Egrets. This record introduced me to the concept of no-input mixing. Using constrained feedback pathways to create pitch, texture, and rhythm in such delicate and musical ways was a revelation. Toshimaru’s seamless playing with the breathy tone of one of my favorite trumpet players Arve Henriksen illuminated the organic potential of purely electronic sound sources for me.

Altered States: Original Motion Picture Soundtrack By John Corigliano. I’ve been increasingly interested in film music and John Corigliano’s score for Altered States continues to inspire. Thrilling, tense, and expansive. When using a tension and release architecture as an approach to composing I often reflect on great film scores such as this one.