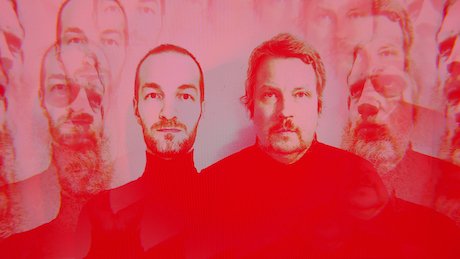 Pharaoh Overlord are the Finnish duo comprised of Tomi Leppänen and Jussi Lehtisalo. They have released a new album called 6 which is out now via Rocket Recordings. According to the press release, the new work is a cataclysmic clash with bewitching results. The band first channelled their love of krautrock-damaged monomania into synth-driven motorik soundscapes on 2019’s “5“, yet this new exploration is a step way beyond into a chilly and captivating electronic panorama.

Beholden to the melodies and textures of Kraftwerk yet also the cinematic austerity of EBM and the effervescent pulse of classic Italo-pop, it’s further abetted by fierce and corrosive vocals from longtime collaborator and Sumac/Old Man Gloom seer Aaron Turner, which stand atop these futuristic serenades not unlike the fevered delivery of a dystopian hellfire preacher.

Listen below and check the playlist with the tracks which inspired their music. It includes Magma, Yes, Popol Vuh, Polvo and many more.

Magma: Zombies. I saw the French band Magma on stage for the first time in 2001 and I haven’t come back yet. One of my dreams came true in 2006 when together with my friends I was able to arrange a gig for them in my hometown Pori. Actually, I would play and compose exactly like this myself, if only I could.

Supersister: No Tree Will Grow  (On Too High A Mountain). A gorgeous tune by this fascinating Dutch band. A seamless ride from soft day-dreaming to Ramones-esque machine-gun attack.

Optical 8: Deafening. In the 90s I used to buy a lot of records from Digelius, the best record store in Finland. Almost everything they had was supreme stuff. I grabbed everything I could by Optical 8. Ever since that I’ve noticed that I come back regularly listening to this great Japanese prog band.

Yes: Release, Release. A classic prog band, which has remained slightly detached from my taste. However, when listening to this juicy track for their Tormato album, I always have a happy, joyful mood. The cover art of Tormato is magnificent.

Captain Beefheart: Click Clack. The whole oeuvre of Captain Beefheart is excellent. This track is premium hard rock full stop. For some reason, I get extra kicks when at 1:20 the groove transcends into murderous degree.

Can: One More Night. The power of determined motorik beat. Is there such timeless music around in fact? Can will be up-to-date even in 3020.

Haikara: Jälleen on meidän. My absolute favorite Finnish prog rock combo. Glorious songwriting, original sound and a true smell of the mundane. The sharpest diamond of Finnish prog is still waiting to be discovered domestically.

Cardiacs: To Go Off and Things. One of my biggest idols. Remarkable music combined with unique attitude and humor. Also Napalm Death has covered this ingenious tune.

Faust: Ein Neuer Tag. In terms of production (Hans Joachim Irmler), the Ravvivando album is one of a kind. It feels like the music is bombarding you from all corners of the room and bending its own rules. At exactly 1:00 there is a moment of absolute beauty (keyboards) and these seconds makes me tremble with happiness.

Polvo: Total Immersion. Perfectly twisted progressive pop music. All these years I’ve admired Polvo’s exceptional arrangements. I just wonder how some musicians can be so advanced. Music like this cannot be made alone, this needs a collective mind.

Kalevala: People No Names. Another pearl from the vaults of Finnish progressive music history. Uplifting guitarism combined with a vigorous vocal performance.

Popol Vuh: King Minos. Simply the most beautiful music in the world. Sincerity lubricates the wheels of doubt.

Grateful Dead: Watkins Glen Soundcheck Jam. I’ve been a Dead-head only 15 years now. I managed to attend one off their shows in Santa Clara some years ago. This jam is somewhat magic. At 3:30 everything clicks in place and the world is one for a brief moment. Soon after that everything collapses again.